Progression and Recession: Board Game

A while ago, our Econ Fundamentals class played the game Cashflow. We all learned somethings about what sustainability means. Sustainability is about having money flow in a positive direction for you. In the game, one way to get out of the “rat race” was to increase your passive income — the money one earns from assets — to be greater than your expenses.

“Progression and Recession” created on PhotoPeach

Later, we were instructed to create our own board games. The purpose of this was to bring together everything we had learned about how money is given value, the banking system, how money is created and destroyed and sustainability. In groups, we worked together to create a board game that was both simple to play and had players learn something about economic fundamentals. In the game that two other students and I created, the goal of the game was to end with a good retirement. There are many ways to end a game of economics, such as in Cashflow where a player would get out of the rat race and move on to land on their dream. The goal of ours was retirement because we wanted our players to go through the motions of an average life and budget their accounts to have the most money set aside as possible.

Our game took players through a path of progression and regression. A player’s movement on the board depended on chance — such as in life where there are crossroads which don’t allow one to have a choice. However, the individual choices that our character could make were to manage their earnings and to plan ways to hold onto career/EDU points.

During the first half of the game, players were in the “student region” of life. In this time, when players land on a black square they can choose a card from the white deck. This deck contains cards that tell a player where to move — to progress of regress. The length of their movements depends on the intensity of the card. For example, if a card says that you graduated from your sophmore year of high school with awards then you would be allowed to advance three spaces diagonally, left or right. Inversely, if the card says you had bad attendance you would be forced to move back two spaces diagonally, left or right. Players go through these cards until they reach the top line of the board. Their experiences through school would have given them certain skills that are necessary for some jobs, such as doctor, teacher, mechanic, businessman, artist, or athlete (which are the available careers in our game). Their school portfolio would say which job they are best suited for depending on their skills and EDU points.

During the career half, the game becomes much more individualized. Players would no longer share a deck; they each have a unique deck made for their career. The same rules of movement apply as players still receive their commands for direction from the cards they choose. At this point, the pattern of the game is meant to mirror the pattern of an economy. Progression and regression fluctuate, so to sustain oneself it is important to place one’s money in a place of trust but at the same time to see that giving back to the community is also necessary. Although the cards would say they wouldn’t always benefit financially, the players could get career points for doing something for the community they serve. 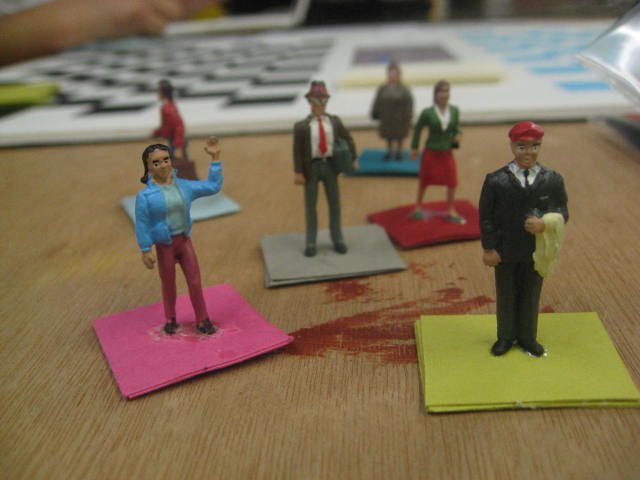