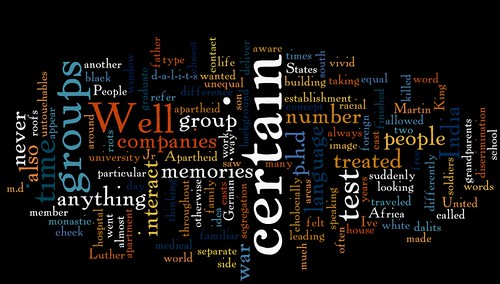 The purpose of my Apartheid interview was to investigate times of which there were apartheid and various sorts of racism through the eyes of the generation before me. I interviewed my father who had lived through the time of the civil rights movement in the sixties and the ending of the South African Apartheid in 1994. I was very happy to find that when I asked my father questions about his dealings with segregation, he was allowed to spend time with various groups of people rather than only being able to see Caucasian children. I was also very surprised to find that my father’s family had been discriminated against during World War 2 for being German. These findings in my interview made me proud to see that my family never discriminated against people for the color of their skin and those values have been passed down to me.

Dr. George John Dohrmann III  68 years of age
Are you familiar with the word apartheid? If yes, what images and feelings come to you when you think of this word?
Well I am familiar with the word Apartheid, the image for me is where there are two groups, groups I am thinking of are the black and white people of south Africa and the concept of they are not equal. In other words they are separate but they are also unequal.
Have you ever faced a situation that felt like “apartheid” or “segregation” in your life?  If yes, how did you face it and how did you feel about it?
No, I was never treated in any way other than a member of the establishment. I never felt that I was not allowed to interact with a particular group racial or otherwise and i was always free to interact with whom i wanted.
Living in other places around the world, have you ever witnessed segregation or apartheid on a smaller scale than the highly publicized movements such as Apartheid in South Africa? If so, what actions have you seen take place?
The closest I could say is in certain areas of India, Ive traveled there many number of times and there are certain groups in India where there is no contact between that group and another. People often refer to them as casts and the cast I’m speaking about colloquially are called the untouchables or the dalits d-a-l-i-t-s and they are. It is a type of apartheid.
Growing up in the United States with grandparents that had immigrated to the U.S., did your family ever experience any segregation or discrimination for being German? If so, give an example or two as to how?
Well there was no segregation that I was aware of but during world war 2 the family was treated differently by certain groups or certain companies in that there were certain companies that would not deliver to the house. and it made no difference that my grandparents had been here for a number of years and that their son, my father was in the war on the side of the United States. There was a certain discrimination of people with a German background.
Living through the 1960’s and seeing the civil rights movement unfold, what were your feelings when you saw African Americans being treated so poorly and violently when peacefully asking for their rights.
Did you or someone you know take action? If so what effect did it have on you?
Well during that time i was in medical school and also in graduate work so I was very much leading almost a monastic life in that I was at the hospital or at the university all the time, I did my m.d. and my p.h.d. at the same time and I have vivid memories of the riots when Martin Luther King Jr. was killed and I have memories looking out the window as i was taking a language test for my p.h.d and i suddenly saw soldiers appear on the apartment building roofs around and I had no idea why they were there. I couldn’t do anything or check into anything until i finished with my test. My foreign language test that went throughout most the day.