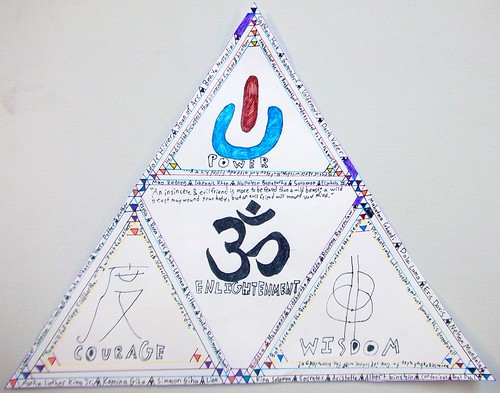 The purpose of this piece was to represent triforce and siddartha’s enlightenment, and find ways to relate them to each other. Part of triforce is the connection of power, courage, and wisdom to reach a spiritual enlightenment, that can be looked at as Siddartha’s Om. The pattern is of triforce, and I put Japanese symbols for courage and wisdom, but the universal remote symbol for power. On the outer triangular rings I wrote famous non- fictional and fictional people that have shown endurance for the purpose of their according triforce. Some of my favorite names include Voldemort, Joan of Arc, Ghengis Khan, and Adolf Hitler for power. This was interesting to learn about, because it sprung examples of endurance for power that lead to horrible atrocities. Under wisdom I wrote Albert Einstein, Confucius, Socrates, and Siddartha. Finally, in courage I wrote Martin Luther King Jr., Jackie Robinson, Kamina and Simmon Giha, and Mother Teresa. I also included my favorite Siddartha quotes in the inner ring of my triangles.