For our second week of MDGs and You, we focused on two MDGs which are:

My assignment was to write a country profile and create a graph or chart to show what gender equality and maternal health looks like in the country chosen. For my country profile I chose Argentina.

Argentina was a great country for this because they currently have their first elected female president and they have made great strides in terms of education and work for women in the last couple decades.

I enjoyed this Milestone because it had me look outside of the United States and think about what life for women is like outside of the places I know. It helped me to understand that even though many people believe that it’s 2012 and women are doing great, in many places they are not and are still struggling in so many important areas.

December 10, 2007, Argentina elected its first female president, Cristina Fernandez de Kirchner. This is one of the strides Argentina is making towards the UN’s third Millennium Development Goals (MDGs) of promoting gender equality and empowering women. Not only have the Argentine women increased the amount of women in the labor force from 34% (1990) to 62% (2006) and make up 40% of Parliament, but they have also taken initiative in how they view and work towards the MDGs. In 2006, a group of female leaders from women’s organizations and other associations came together at a conference called “The Millennium Development Goals and Gender Equality.” The purpose of the event was to discuss methods of approaching all eight of the MDGs with the lens of gender equality and the impact that a lack of gender equality has every single one of the goals. Looking at the statistics being gathered about the indicators for each goal and thinking about the greater vulnerability women might face in each one forces onlookers to dig deeper into what these numbers mean and how they impact the life of the women in Argentina. It would involve taking a closer look at the difficulties women face in access to jobs, housing, education or other aspects of the MDGs compared to those of men. We already see a specific focus on women in maternal health and the concern about maternal mortality rates in MDG five. From 1990 to 2006, the amount of women who give birth under the care of skilled attendants in Argentina has increased from 96% to 99% because of the efforts put in to improve the lives and care of women. Argentina, overall, from the statistics offered by the UNFPA, seems to show an upward turn for their women and their access to education, medical care, jobs, knowledge and prevalence of sexually transmitted diseases such as HIV/AIDS. 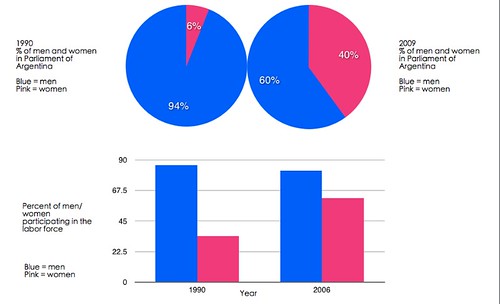