For Milestone 1, we studied the water cycle in order to learn more about the chemistry of water and why it is important. Then we did a lab report to show what we had learned in an organized manner. Below is a copy of my lab report

Hypothesis:
I believe that all parts of the water cycle will be represented, excluding deposition and sublimation, and most of the water will be present, excepting some that was lost due to evaporation.

Methods and Materials:
To achieve a small ecosystem, we used a tank filled to about an inch high of water. On one half of the top, there was a mesh covering, and on the other side there was tin foil. The mesh was used to try and achieve evaporation, while the tin foil was there to see if the water would condense. We also had a beaker of ice water on the top, to see if it would melt. In the tank, we put a laminated piece of paper to use to see if there was runoff of the condensation. Below is a diagram of the experiment. 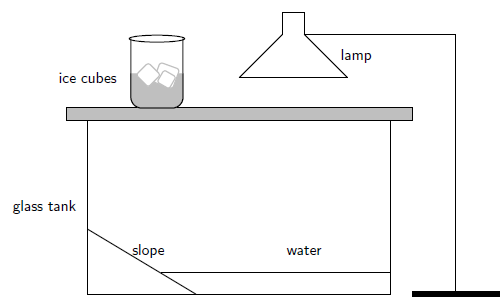 Instead of using a lamp, we positioned the tank in the sun for about 45 minutes, to try to create a more realistic view of the water cycle.

During the hour and fifteen minutes we were gone it was an average of 60 degrees fahrenheit outside, and we left it in the sunlight from 10:00 am to 11:15. The ice in the beaker melted. There was little to no runoff on the slope, and no condensation on the top with the tin foil. There was condensation behind the laminated paper, and it was adhesion to the glass on the tank, side facing south.

Discussion:
Unfortunately, this experiment was not as successful as we hoped. Because we did not measure the amount of water before we began the experiment, we could not measure to see if any water had evaporated. In the future, this is an adjustment I would like to make. We were expecting to see condensation on the top of the tank, where the tin foil was, but we didn’t, I believe this is because of the position of the sun, which was facing more towards the southeast. There was condensation on the side of the glass, which also showed adhesion, but this was not where we were expecting it to be. We were only able to see two distinct and measurable parts of the water cycle in this experiment, condensation and melting (of the ice). The ice was there to test how long it takes for a cup of ice water to melt, and it showed that an hour was more than enough time. If we were to do this experiment over again, I would try to find a more constant form of light, like a lamp, and I would make more measurement to compare beginning to end. We also let the experiment sit for an hour and fifteen minutes, I would lessen this time to about 30-45 minutes.