For our first Milestone in our math/science class Water, we set up a tank full of water with a beaker of ice and some aluminum foil to see if we could observe any parts of the water cycle. This experiment was kind of hard to do because of a lack of precision and measurement, but was still really interesting to watch and try and understand.

Water, being so essential to our existence, is at the heart of this experiment. It aims to explore different phases of the water cycle and under what circumstances they occur. With water covering 70% of Earth and our bodies being 60% water, it is of the utmost importance that we understand the crucial role it plays in our ecosystems. Furthermore, the water that we have today is the water we have always had, excluding the molecules that have been physically ripped apart, it is all we will ever have. The cycles flows from being rain to falling into a river to evaporating into the sky to snowing down and being absorbed into the ground and because of how water goes through all these different mediums, it is exposed to the pollution and spills that humans cause. It can take years for water to clean itself naturally, so understanding the water cycle and the impact that pollutants have on water is vital to having enough clean water for everyone.

Hypothesis:
I believe that all parts of the water cycle will be represented, excluding sublimation and deposition. 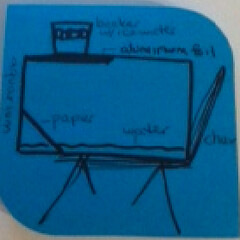 Results:
We returned to the tank and the water was murky with dirt and other unidentified particles after one hour of having set it up. It had been sitting in the sun, about 60º Fahrenheit, behind a curb in a parking lot with the reflections of sunlight hitting it from the East side of the tank. At that point, the ice had totally melted and the water still felt cold to the touch, but was completely liquid. There was a rectangle of condensation on the South side of the aquarium and the water droplets had dripped down the side of the tank into the water. There was no concrete evidence of evaporation and, as I had predicted, signs of sublimation and deposition were nowhere to be found.

Discussion:
The sun was the source of energy that allowed many of the different phases to occur. The experiment had water and ice in the beginning and the ice helped to start with water in more than one form and eventually melt into water. This experiment lacked precision. Many small things could have been done to improve the experiment and help prove that phases, such as evaporation, occurred with just a simple marking of the water’s height. A better location with more direct sunlight could have provided potentially more noticeable results. A cleaner tank with less dirt in the water might have allowed for the phases to occur more easily. The only parts of the water cycle I am completely sure I saw are condensation and runoff.  I am positive that sublimation and deposition did not occur, as stated in my hypothesis, but have no evidence to support other phases having occurred or not. I believe that water could have evaporated, leading to many other phases, but because of no line being marked, I can’t say for sure if different parts like precipitation, advection, infiltration etc. occurred. All of the problems that we encountered in terms of figuring out how to quantify and say definitively that a certain phase did happen could have been solved with focusing more on being exact with our numbers.