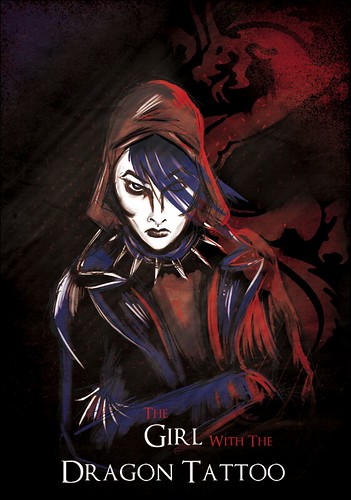 Intro
This is a fictional adaption of Salander’s detective work. I combined Salander’s fictional, yet amazing detective work with my favorite mystery: the Kira case from Death Note. The purpose of this piece is to portray endurance and an exciting story. This was my first mystery piece, and I have always thought that the hardest part of a mystery is to not leave any open ties, and I am proud that I did not. I learned a lot about grammar in the process, especially how to use colons and semi-colons.
Me, Myself and Lisbeth Salander
Lisbeth Salander is a woman who is reluctant to trust, even the most trovärdig (trustworthy.) I, chief investigator of the NPA, J.D.T, was assigned to research Salander’s involvement with the Kira case… simply a mystery of supernatural motives, involving murders of criminals. The hardest piece of the puzzle is the question: how does Kira kill? Criminals drop dead of heart attacks, when Kira is nowhere near the victims. However, the victims have not only been wrongdoers…

Salander was recruited for the investigation, by recommendation from the recently found dead; Mikael Blomkvist. We quickly came to know Salander as a brilliant detective: fearless, unemotional, and logical.  Her first order of business was to find out what Kira needed to kill. She discovered that all of Kira’s victim’s names and faces were public on the internet. This information led Salander to suspect that Kira needed a name and face to kill. Determined to verify this theory, she hacked on to the New York Times and created a fictional crime. The crime was horrific, even compared to the crimes that Kira’s victims had committed. The key to testing her theory: she never released the face of the fictional culprit, just the name. Afterwards, we waited and waited, and our guinea pig remained unharmed. However, when Salander then displayed unwillingness to catch Kira, we began to suspect Salander of involvement with Kira.  After a raid of her apartment, we discovered that she had hacked into Kira’s computer, and was tracking his moves. Making assumptions is part of any investigation, if we’re wrong all it’ll cost is an apology *1.  Sadly, this was only the beginning of our misstro (suspicion.) This suspicion would become my greatest failure, and would haunt me even after my death.

Later, we searched her apartment, and discovered a notebook. The notebook would later be known as the “notebook of death.” Normally such an item would be discarded, and marked as a irrelevant. But all of us on the task force were very ready to discover supernatural abilities in the murders committed. We weren’t expecting to find a notebook with the ability to kill the names written in it, and control the victim’s actions leading up to their death. We noticed all of the names written were in similar handwriting. However, the last name written: Light Yagami, was written with a different ink and handwriting. Deep down in my heart, I already knew the notebook would produce supernatural skicklighet (abilities). I wrote down the name of a single criminal.

One day later, the criminal was dead.  I didn’t want to believe it, but I knew at that point that my life was in grave danger. We decided to arrest Salander. We stormed her apartment with intentions of confining her, but found her dead upon our arrival. Then, I made the biggest mistake of my life. I burned the notebook of death, but as it burned, I dissolved into nothingness, my mortal life ceased to be, and I descended into afterlife. In my afterlife I looked over the human world, left with the burden of time, to ponder my mistakes. I knew that by destroying the notebook, I had destroyed myself. At the time I considered myself a martyr, sacrificing myself and leaving the mystery förklarad (solved). However, 10 days later, criminals started dying again; I watched my mourning subordinates, knowing they would never solve the case. Knowing they would be killed. The world’s only two chances of solving the case, had recently been killed by the notebook. 10 years later, the mystery remained unsolved.

The lost diary of Lisbeth Salander
I found Kira. His name: Light Yagami. Three days before my death I realized that Kira had to be somebody with access to the information that the FBI possessed. I decided that investigating the FBI as a whole would be outhärdlig (impossible). So I hacked my way to the digital barrier of classified information, to discover another IP address browsing through its information, copying and pasting names. Later, I discovered that these names would soon cease to survive, and I knew that I had found Kira.  I tracked the IP address to find an address of the Yagami household, in the Kanto region of Japan.

I arrived at the Yagami household, only to find one person home: Light Yagami. When I opened the door, I found him writing names into a notebook. Yagami was clearly startled and worried at seeing an unannounced visitor. I knew that all of my moves had to be subtle and precise. I had arrived disguised as a plumber, with the fake name of Violet Fraum. In actuality Violet Fraum was my guinea pig. Isn’t it funny how the fight against evil can stretch a person’s moral boundaries. Isn’t it strange how a person changes, in the face of life or death? After Yagami rejected my plumbing, he asked for my name, and I gave him my alias.

Upon leaving, the only thing I could do was visit Fraum. I told her everything, and both she, and I knew that her death was a ticking clock. While I was eager to learn, she was pondering her inevitable doom. And finally, all of the verification I needed was in front of me, as I watched Violet Fraum shrivel away into intighet (nothingness). Only then did I know, that Light Yagami was Kira.

Upon this conclusion I knew what everybody in the world wanted to know. But I was frightened. I was scared of dying, scared even more that I would die in gagnlös (vain). It was more fear than I had ever encountered. But at that moment, I knew there was only one thing I could do. I had to bring this lunatic to justice, before anyone else could be killed.

When I got to the Yagami household, Light’s father answered the door. I was prepared to find Light, and murder the murderer. But to my relief, Light was not home. I lied to his father, told him I had left my notebook with him. After welcoming me into his home, I took the notebook from his room, and made way for the door. To my horror, as I opened the door I found Light opening the door. As he saw me, he was rygga tillbaka (horrified). However, I knew that he had discovered my alias. He saw the notebook in my hand, and I know he knew it was over at this point.

“Ryuk. Give me the Ögon (eyes).” Light’s eyes glowed red, and he whispered the words: “Lisbeth… Salander.” This was the most petrified I had been the whole time. Knowing that Light had to have a piece of the notebook torn and stowed away, I fled his house and wrote my name down, before he could have the chance. I wrote the details of my death (in reading the rules of the notebook, I found that after writing a name, the owner has 40 seconds to write the details of the death, or the victim will simply die of a heart attack):

I met Lisbeth one more time after our deaths, and I finally had the chance to ask her the questions I needed to.

Q: What is the most important thing you learned in your life?

Q. What did you learn about friendship in your lifetime?

A. Friendship- my definition- is built on two things. Respect and trust. Both elements have to be there. And it has to be mutual. You can have respect for someone, but if you don’t have trust, the friendship will crumble.

References
*1 Making assumptions is part of any investigation, if we’re wrong all it’ll cost is an apology