The purpose of this project was to explore movement and answer the Guiding Question for this unit: How are movements recreated from Nature to Humans to Machines? In order to accomplish this, we took a class trip to the zoo and watched videos of our animals move and then thought about people and machines that mime their unique and quirky movements. I learned about Power Animals,the I Ching and natural elements and really enjoyed creating my kinetic sculpture. 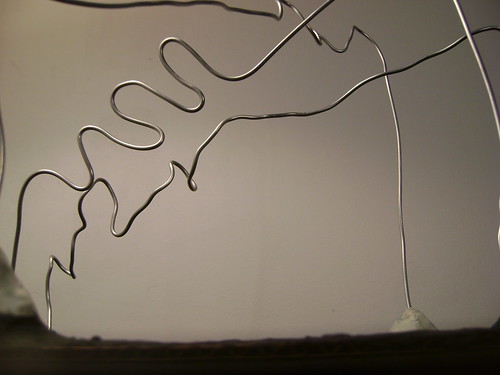 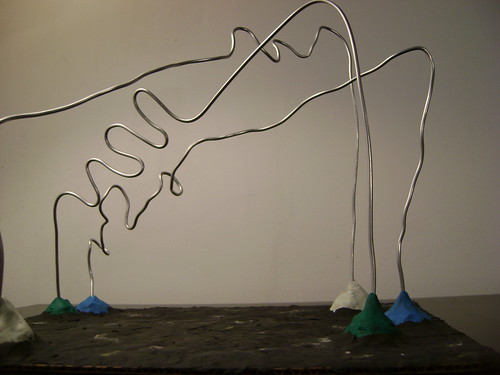 This piece shows the movement of a swan in takeoff of the animal’s own movement, as well as human and machine movements that mimic it. I was inspired by a person hang gliding and running off to start the adventure as my human track and an airplane in takeoff for the machine track. This project has many roots and involved many different side projects to fully develop itself. It began with an exploration of Power Animals and how they connected to the elements of our I Ching reading, an ancient Chinese manual of divination. I chose a swan because they are graceful and incorporate so many elements because they can fly, swim and walk on land. Another characteristic that drew me to them is that they are really feisty in an unexpected way. Once an animal was chosen after extensive research and personal reflection, a study of movement began, observing how the animal moves through space and time. With this information, simple flip books were crafted focusing on one specific movement of the Power Animal, the swan in take-off in my case. 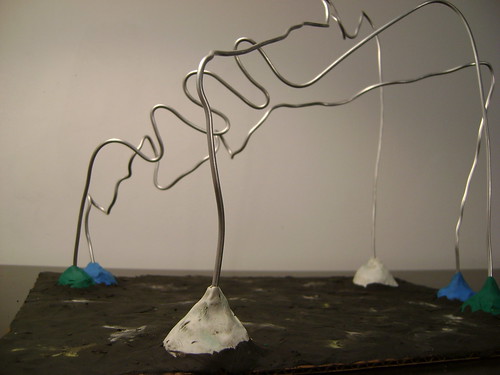 Movement and the path of the animal, human and machine were twisted onto wires and then it came time to construct the wire tracks and the cardboard and clay landscape. This piece was built by bending wires and then using clay to attach them to a piece of cardboard, as well as using clay to decorate the board to match the elements of ourselves and the animals. The clay on the cardboard shows a night sky because one of the swan’s natural elements is air, but I chose night instead of day because swan’s have an aggressive attitude. The clay beads on the wire track the movement of the animal, person or machine.  This project was completed with clay, cardboard and wire. My piece is 9.5 inches tall, 11 inches long and 9 inches wide. 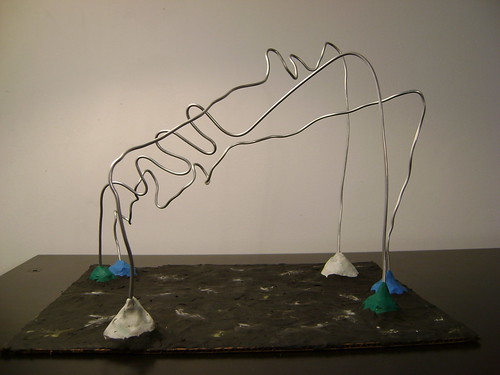