In my Integrated Arts Course, we had to make a kinetic sculpture based on the movement of a power animal we found and by showing our element that we found fitting ourselves. The purpose is to portray our power animals movement and the movement of things that move similarly. I am very proud that I was able to find a power animal that really fit to me. I learned a lot about power animals while I was looking for one that fit myself and I also learned how to find an Iching reading. 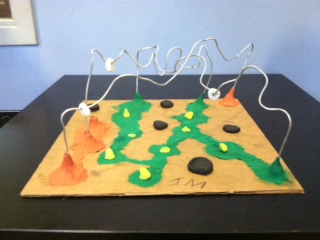 Made with: Clay, Sculpey, Wire, and Cardboard

This piece of art is supposed to display the movement of my Power Animal, a human movement that is similar, and a machine movement that is similar and they all have to relate to our natural elements through the use of bent wire and molded clay. To get this final concept, I first did research on what power animals were. Then we used Iching readings to learn about different elements that would help us find our power animals. Then I went into the process of finding out which animal was my specific power animal.

Then we went to the zoo as a class to find out more about our power animal and to observe its movement. We then drew the movement of our animal in a flipbook we were all supposed to create. Using what we could now observe from our flipbooks, we then drew what we thought the movement path of our animal looked like. Then we found human and machine actions that make the same movement patterns.

We then drew those movement patterns. This allowed us to bend the wire and make our kinetic sculptures. Finally, we made beads out of Sculpey that allowed me to display the movements of the animal, machine, and human. During this process I found that my power animal was the Gorilla and that my natural element was Earth. The wavy and swirvy path is for the gorilla because its arms go out first then the feet follow. I picked the gorilla movement of walking because an attribute of the gorilla is that it trudges through tough things and I do that also. The wavy and slow path  is the path of a baby crawling. I picked the baby crawling because it also shows it going through the tough times. The wavy and fast path is the movement path of the cropping machines used by farmers. I picked this because Cropping machines also go through tough things.

My natural element is earth and I expressed it in the grass and dirt. I chose green, brown, and clay colored because it expresses earth. I placed all of my movement tracks close to each other so that i could show that they were all closely related.