In my A Nation’s Argument course we are learning about inductive reasoning and how to use it in an argument. Inductive reasoning is the process of obtaining general principles from particular parts or instances. We then figured out how to find inductive reasoning within our U.S. Constitution and the book Beirut 39. For our action plan, we looked through our own school’s code of conduct. We found issues we thought were unfair and then, using inductive reasoning, wrote our own amendment to change the rule. Over all, this project taught me a lot about the art of arguing. At times, I did have trouble remembering what induction actually meant, but towards the end I got the hang of it.

The Code of Conduct (before my amendment):

Food: No food is allowed during class or in the classrooms. Snacks are welcome and allowed between classes and/or during lunch time (in the hallways or in the kitchen ONLY). Students are allowed to buy food or drinks during school hours, only on the school premises (vending machines at Menomonee).

Drinks: water and/or drinks are welcome, but only using student’s GCE reusable bottle. Lunch will happen in the Lunch/Kitchen area only. A student Captain will be assigned for the day (See Lunch schedule and duties on page 8). It is the responsibility of each student, not the Captain, to clean up after him/herself.

The Code of Conduct (after my amendment):

No food is allowed during class time, but while on class breaks students are allowed to snack, but only if all computers are a reasonable distance away from all electronic devices. Water, coffee, and tea are welcomed during class, but only if all electronic devices are off the table or a far enough distance where they can not be harmed if something does spill. 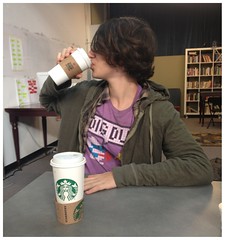 Why?
I believe that students should be allowed to eat during class break. Many of us are too busy to eat breakfast or need a snack throughout the day. Of course all computers would be on the other end of the room, so no one will risk the chance of destroying someone’s computer. This rule is not enforced enough and I believe we should be allowed to drink water, coffee, and tea in class. If someone is sick they should be allowed to drink something warm to soothe their throats, plus a little tea and or coffee would be nice if student’s energy levels are low and they want something warm or other than water. This rule should only be allowed if no computers are around the area in which it can harm the computers. These rules should be followed and all students should take FULL responsibility of one’s actions.

Democracy is a form of government, which allows all eligible citizens to have an equal say of decisions that affect their lives. If we talk about an example of a democracy, we can look at the school. We, the students, would be the “eligible citizens” and have a right to speak up if we don’t agree with something. Eric, our director, then usually asks us to write a proposal as to why we don’t agree and what we can do differently. This way, we are allowed to have a say in what’s happening in our school environment. However if a student were to accidently spill on someone’s device, they’ll have to pay for the damages. This way the students become more aware of their surroundings, and teaches the students to take complete responsibility for their action.

Similar to the short story I read in Beirut 39 which was called Skin of Shadow by: Alderrazak Boukebba. In this story, there is a boy, Dhiab, who also has to take responsibility for his actions. Dhaib is forced to make a pledge saying that he will not leave his small town until he dies. Knowing the consequences of his actions, he said no he would not make this promise. His village leaders tied him up to a tree on the outer edge of the town. He then realized that since he believed in something his leaders didn’t he could only get freedom if he accepted his punishment. In this case Dhaib is taking full responsibility for his actions. In the twenty-first amendment you will find’s similarity between the rules for the code of conduct as well as in Skin of Shadows and how they all resemble the fact that you have to take responsibility for your actions. The twenty-first amendment states “Alcohol is legal. Each state can make laws about making, selling, and drinking alcohol.” By doing this all states will have to be responsible for ticketing and arresting those who break laws while under the influence.