For my final action project in A Nation’s Argument, we studied dialectics in argument, an idea which was first introduced by Hegel in the early 1800’s. Dialectics consists of three levels of discussion or argument. The first is a thesis, which is an opinion on an issue. Second is the antithesis, the counter-argument that attempts to overturn or negate the thesis. The final level is synthesis, the resolution or combined agreement of the heated debaters through the combination of both the thesis and antithesis.

I decided to have one of the underclassmen currently enrolled at GCE, LF, challenge my thesis on the legalization of medical cannabis at the federal level.

The federal government should legalize the use and taxation of cannabis for medicinal purposes to increase federal income.

I believe that the legalization and taxation has more of a positive impact on our country than a negative one. Not only does medicinal cannabis have the application of an all-natural pain reliever but it can also be used for the production of clothing, sails, rope and even consumption. With so many applications for a single plant, I don’t see why the government has made it illegal. Not only does it have more applications than that of alcohol or tobacco, but it causes fewer deaths than either. There has not been one, SINGLE documented death due to marijuana use when used alone (CDC, 2012). Finally, with the taxation and sale of medicinal cannabis our nation will profit in the millions which can never hurt a nation in debt.

To symbolize the minuscule amount of danger medical cannabis poses to our nation’s people compared to that of alcohol or tobacco, I have created a pie chart showing the percentage of the combined death toll from all three drugs – tobacco, alcohol, and cannabis – which is 484,682. 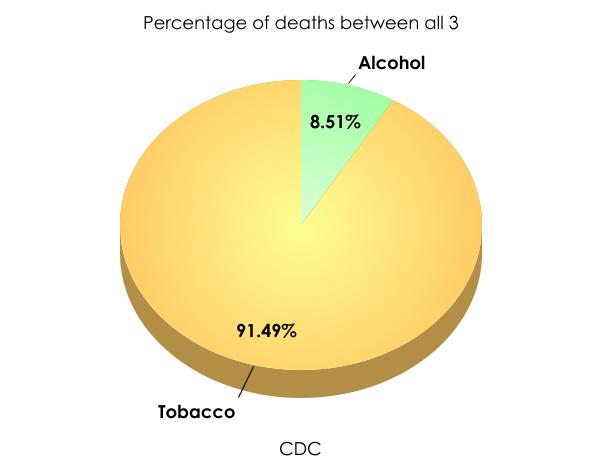 I showed my peer, LF, my thesis; below is her written antithesis, as well as our recorded discussion.

Medical Marijuana is a drug where the negative effects greatly outweigh the positive effects and therefore should not be legal.

“Marijuana is a gateway drug!” LF began. She felt its use always leads to other more serious drugs that could be fatal. When you’re under the influence, you lack inspiration and drive in your daily life, in terms of school and work. It is also bad for your lungs and can cause cancer. It also can impair your motor skills and could possibly cause a serious accident, if a user was operating a car under the influence.

Click the SoundCloud recording below to hear excerpts from our dialogue.

The United States should be able to legalize medical cannabis, within strict limits on age and medical conditions.

After a long discussion back and forth debating whether legalization is morally right or not, and what the consequences would be, we came to an agreement. Although we agreed to legalize it on a federal level, we decided to have very high restraints on its distribution and sale. Our new rule would allow people who are both 1) in extreme medical conditions and 2) over the age of 21 to possess and use medical cannabis. Therefore, those who truly need the medicinal purposes of cannabis have access to it, but its use would be restricted enough so that it would not be abused by others.