Leavening Agent in a Baking Recipe

For our Eat course our unit two action project was to create a lab report. We did this to explore the different chemical reactions of food. We made cupcakes and learned how to substitute an important missing ingredient, baking soda. We did this by learning how to create a new leavening agent by having a acid and base ingredient from the pH scale. To replace the baking powder I used olive oil and applesauce. Below you’ll see the results in my lab report. One thing i’m proud of in this project  is doing all the different calculations and the conversions from US metric to millimeters. One thing I really struggled with during this project was making sure that all my calculations are right. Please have a look at my lab report below:

This report will be talking about substituting a leavening agent in a cupcake recipe  by having a basic and an acidic ingredient. I got a cupcake recipe and I had to make it without the baking powder which is the leavening agent. In order to replace this I looked at the pH scale and according to that I got one basic and one acidic ingredient. My first substituted ingredient is olive oil that have a pH of 8 which leads to it being basic. My other ingredient was the applesauce it have a pH of 3.5 that is acidic.  With that I feel that my cupcake is going o have a great apple taste.

My guiding question that I will be answering in the report is, What happens when you replace baking powder to olive oil and applesauce in a recipe?

If I mix apple sauce with oil then they will react and make a leavening agent.

Materials/ Ingredients for one cupcake:

Control group:  It is nice and crusty, it is moist from the inside, it rose properly

Experimental group: raised from the edges, sinked  from the middle, sides are crunchy, chewy on the middle. 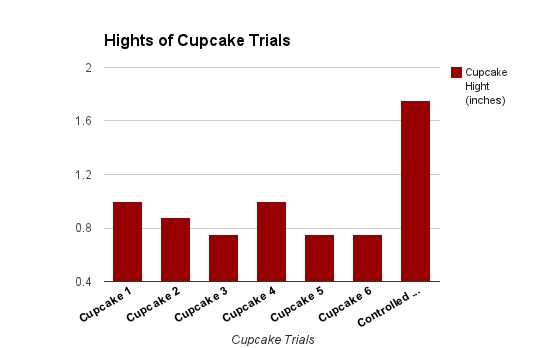 Overall based on looking at the data I show above I can tell that my cupcake experiment with the leavening agents I predicted was wrong, but it had a great taste. My cupcakes had sunken down from the center instead of rising and the edges is what rose. they had a chewy taste and for my final recipe I had chose cupcake number 6 because it had the apple sauce taste, chewy, and it was crunchy from the sides. With all that I can say it was a great experiment to try and even though my prediction had failed I can still say: It didn’t rise, but it did have a great taste.