In my Food Redux class we created a report on GMO’s and our position on it being open to the world. The process of creating this paper was not as hard as I expected. The only reason that I’m saying this is because all the information I found online are against GMO’s so it made it easier to write the report. One thing that I learned creating this report is that Monsanto is a powerful company that controls 86% of corn crop around the world. One thing that I’m most proud of in this report is probably my graph that I worked very hard on to show you guys how much corn cost that are not organic in the US are going up. Please view my report below for a great GMO experience.

GMO is a genetically modified organism. Plants or animals created through the gene splicing techniques of genetic engineering. This experimental technology connects DNA from different species creating an unstable combinations of plant, animal, bacterial, and viral genes that cannot happen in nature or in traditional cross breeding.

“I rather eat meat that comes off my farm rather than another farm because I don’t know how other animals are  treated on that farm.”

Source of my dataset.

Time frame of my graph (year). 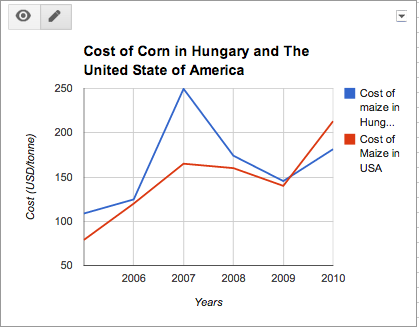 Support your position with 3 arguments.

Product Cost: Product cost has gone up since the starting point of production for genetically modified corn.

Monsanto: The company create harsh pesticides that are designed to kill everything natural they touch. The most popular, which is called “Round Up”. The company then creates GMO’s that are unaffected by this specific poison so that farmers can blanket their field and kill weeds, pest, and everything else. They now control 93% of the soybean, canola seed, and cotton crops. They also control 86% of corn crops.

I feel like my ethics towards non GMO’s  is a normal response for someone that is against it. I also think it’s a responsible response because non GMO’s are not only healthier but cause no effect to your body that in any way harms it. I feel like GMO’s are not needed in this world. We have lived without them in the past, and tells me we can do it in the future.

It makes sense to feed the world, I’m not against that. The one thing that I am against is feeding the world posen that cannot be taken back. I feel like some farmers that plant GMO’s are trying to help and feed the world, but they are not doing it the right way.