For our Food Redux course we had to create a presentation explaining either the Pros or Cons GMOs. For the sake of argument and the challenge I chose Pro GMOs, during my project I found that this was a hard position to defend. I agree that GMOs do provide food and sustenance to be people who don’t have it and have many other values. However I also believe that it is wrong to genetically modify our food and I don’t think that the Pros outway the Cons, especially in the long term. Also when considering the damage that big companies have done to the food system to insure that they make money by forcing unwilling farmers to use their seeds, I feel that the human race doesn’t have the self restraint to use to GMOs in a completely ethical and unselfish way. Overall I am proud of my project and am impressed by how much work I put into it.

For our Eat course our unit two action project was to create a lab report. We did this to explore the different chemical reactions of food. We made cupcakes and learned how to substitute an important missing ingredient, baking soda, we did this by learning how to create a new leavening agent. Below you’ll see the results in my lab report; below the picture there is also a link to the PDF of my lab report. One thing i’m proud of in this project  is my graphs and charts I think they are very well organized. One thing I really struggled with during this project was making all the calculations and converting cups to millimeters. This report will be showing what happens when you substitute different leavening ingredients for baking soda. I will be using egg whites as a base and vinegar as an acidic  to create the chemical reaction that occurs when you mix an acid and a base. In order to choose and acid and a basic ingredient you use the pH scale, which is from 1 to 14. 1 to 6 is acidic, 7 is neutral and 8 to 14 is basic.

What happens when you substitute egg whites and vinegar as a leavening ingredient for baking soda?

If I substitute baking soda with egg whites and vinegar then this mixture will act effectively as leavening agent.

Moist on the inside. Soft. Good texture and rose properly. Leavening ingredients effective.

Moist and soft on the inside. Golden brown top and edges. Feels very sponge like. Flat almost all the way across with some small rises. 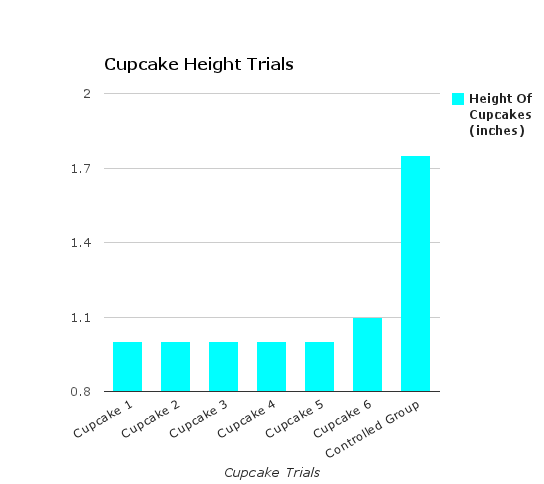 In conclusion my hypothesis was incorrect most of my cupcakes barley rose, because of this I can infer that  the chemical reactions that occurs when an acid and base mix may not have occurred, and if it did it occur it was at a very low rate. Therefore I feel like I failed to create a successful leavening agent during this experiment.  However I chose cupcake 6 as most my most successful cupcake because it rose the highest and it was golden brown around the edges and on the top.