For our third and final action project for the class, Light and Sound, we had to create our own time telling device. We did this project to better understand how  time telling coordinates with light and sound. While doing research for this project, we learned multiple different math concepts that can be applied to the use of a sundial. I decided to use sound to measure the time of the day. So I used a metronome. Below is a picture of my rough sketch of the metronome and my paper. Enjoy! 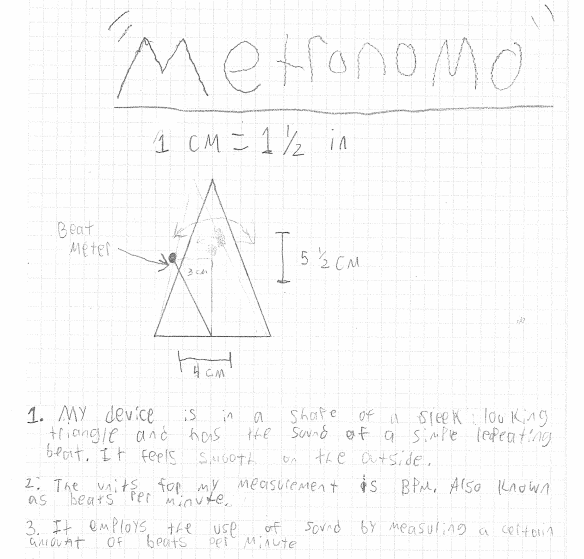 My device is in a shape of a sleek looking triangle and has the sound of a simple repeating beat. It’s outside structure is very smooth. The units I’m using for the measurement is BPM or beats per minute. It employs the use of sound by measuring the exact repeating amount of beats in each minute.

I have three core math concepts for my time telling device. The three concepts I have for an overall accurate measurement of the time of day is first, measuring the amount of beats per minute, secondly adding up the repeating minutes and thirdly is subtraction . By adding up the minutes I can tell how many hours have passed therefore I can tell what time of day it is. For example if there are 10 beats in a minute 10 beats + 10 beats= 20 beats or 2 minutes. But if there is a mistake in the mathematical process I would have to subtract from the total number of beats per minute to get the correct time.

The culture I chose was Italy where the piano was created. The creator was Bartolomeo Cristofor. Since a crucial part of any pianists playing is staying on track with the tempo of the beat and a metronome is the tool that helps with that, it only seemed fitting to use this as my time telling device. That is what most predominately influenced my my device to be a metronome.

This is a meaningful way of telling time because it blends culture and simplicity into a fun way to tell time. Music has been a very strong influence in all cultures for thousands of years. So it only seems right to incorporate a tool used in music and apply it as a tool of time telling.

As our last project for Light and Sound, we created designs for our very own time telling device. We then wrote a small paper about the designs and why we did it. Below are my results and the design I made. I wanted to stick to a simple, portable design, so I came up with the “Sun-Watch,” a portable sun dial. The time of the Moon By: GL

In my math and science course, we learned the purpose of time , and how it relates to math, science and us. We were asked to create a time- telling device. The purpose of this project was to create a prototype of a time-telling device, and explain its principles on paper. Overall, this was an interesting experience, I say this because it was hard to come up with something so original.

Below you can view my paper:

I related this to math by talking about the arcs and of the moon; how how it relates to Pi. The arc is a portion of the circumference of a circle. An arc could be a portion of some other curved shapes, such as an ellips. Arcs are named by their end  points.The angle measure is the angle formed by the arc at the center of the circle. By using Pi it helps me find the circumference of the moon to its diamiter. By using circumferance it allows me to measure the shadows of the moon phase’s shadows. By using diameter I can tell you that the circumferance is 20,901 miles; I want my moon to be almost as big as the earth so the moon is able to be seen from all places on the planets.

My theory is related to a sun dial in two ways. For example a sundial is a device that tells the time of the day by the position of the sun, as the sun moves across the sky. This can be related to my moon phase because they both need objects from the sky to assist in telling a time. The shadow edges aline with different hours, similiar to my moon phase and how the moon’s shadow grows, changing the season.

My cultural studies are inspired by Charles Darwin and his theory of evolution. I went back in time to 1859 when Charles published his book called “On The Orgin of Species”. This helped me figure out my time-telling device by relating the thory of the evolution of humans and how the evolution of the moon phase and how it changes from one thing and progresses to another.

This is a very useful device it allows people to tell the seasons, as well as the time of the year. The moon I picked will be almost as big as the eart so seeing the moon wont be a problem unless its a new moon meaning the moon is all black. When this happens you know your half way through the year.

For the last few weeks in my light and sound class, we have been studying about time. We discussed the speed of light and the theory of time travel. For my last action project,I had to do a science and math paper of a sundial. The purpose of this paper was to get skills in writing a scientific paper and to describe my prototype of my star sundial. In the paper, I talked about my prototype, included a sketch of it, and discussed how it would work. Also, in my paper, the math I used in my sundial, and a list of references. Below is a slide-rocket presentation of my paper:

Making our AM radios was a challenge, but it also really helped me to understand how complicated circuitry is. We made an AM radio with a kit, using the tools they gave us, but unfortunately only two of the radios ended up working, and when they did they only made a high pitched screeching. I did really enjoy working on the last part, which was the art. Our theme was “Antarctica” so we designed our radio like a glacier. Below is a presentation about it.