In the final unit of our Light & Sound class, we studied the way time works in the universe. Our action project was to invent a device that could tell time. Mine is based on the rotation of sunflowers– specifically, sunflower buds, since I learned that the flowers do not rotate to face the sun once they are fully grown. A diagram of my invention is below, along with a paper describing how it works and the mathematical and cultural influences behind it. Before sunflowers bloom, their buds rotate to follow the sun through its daily rotation. The device I created uses the flower to tell time by putting a clock face at the top of the stem. A pendant attached to the bud drops down to the clock face, so as the sunflower moves to face the sunlight, the end of the pendant moves along the numbers of the clock face, which correspond to hours, to show what time it is.

In order for the pendant to correspond correctly to the current time, the numbers that mark each hour must be evenly spaced. To find the space between each number, you must first find the clock face’s circumference. The equation for this is

This math is nearly identical to the way the clock face is made for a sundial. The device itself is also very similar in that it is based on the rotation of the sun. However, this device is missing the key component of the sundial, which is the shadow cast upon each hour. The pendant replaces it as a marker, and the flower’s rotation is follows the sun, rather than a stagnant piece of the sundial being affected by the sun.

Sunflowers were domesticated around 5000 years ago. The oldest evidence of this was found in Tabasco, Mexico. Other sites of ancient domestication have been found in the southern United States (Kris). They have been used throughout history for ceremonial purposes, food, and flavoring, but they are famous in European culture for being the subject of Van Gogh’s series of sunflower paintings (Wikipedia). His paintings are famous for showing their simple but colorful beauty (Van Gogh Gallery).

Like Van Gogh’s paintings, this device is based on a simple phenomenon. It is not complicated technology; it employs nature. The fact that a plant can respond relatively quickly to the change in light is an impressive reminder of what can be accomplished without electricity or any other man-made technology. While the device and even the concept of time are both man-made, this sunflower clock creates a more meaningful connection to nature for the user.

Researching the Past by HM

In our final project as action for Light & Sound, we created a time telling device that would help us measure time.  For part of our project, we were given the option of traveling to any place in time, forward or backward.  I chose to go back to the 1930s and 40s in Mississippi to see my favorite artist perform, Sam Cooke.  For my device, I created three separate hourglasses, however, made with cups and beans.  The purpose of this project was to apply light and sound to a time-telling device.  It was definitely a different way to think about this project.  I’m proud of all the research I did.  Check it out below! 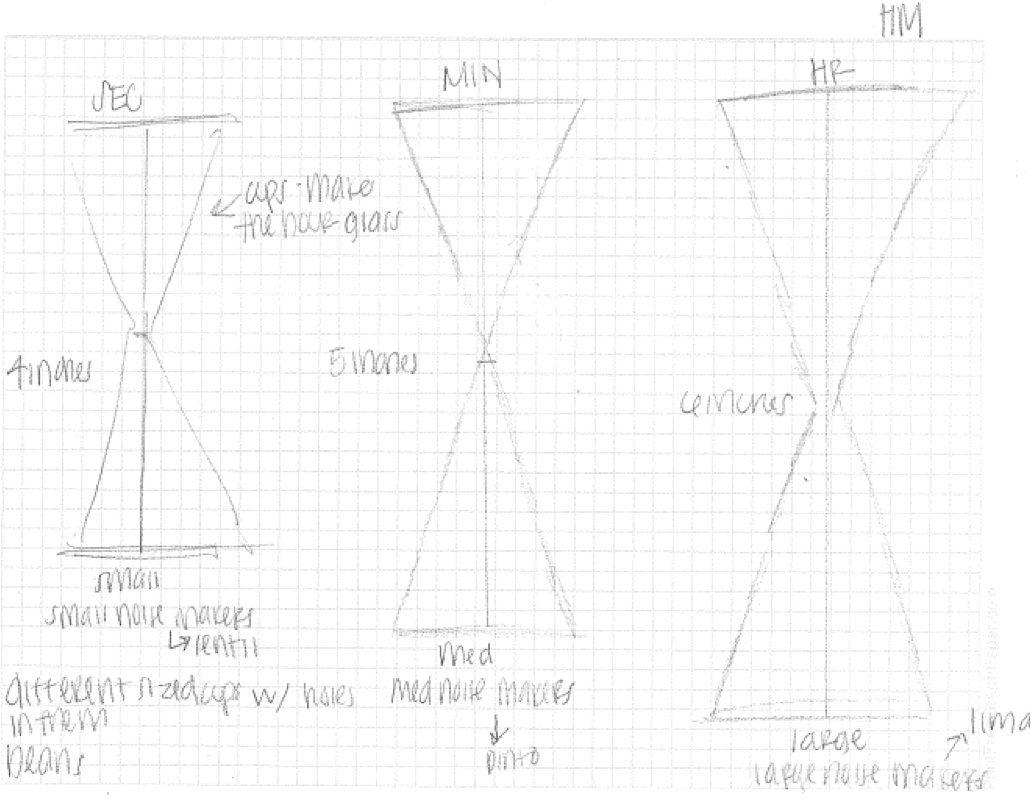 In this unit of my math and science course, we studied how light and sound can be used to measure time. To my surprise, cultures have been using light and sound for this purpose from the beginning of time. I enjoyed learning about the mathematical and scientific aspects of light and sound for telling time, but as someone who is very interested in history, it was also fascinating to learn about the anthropological and historical aspects of telling time. For our last project as action, we were given the task of designing our own time-telling models that use either sound or light to function. Please view my essay below!

My device is similar to a sundial in that it employs the same measurement tactics. The way my design functions is by using the sun’s rays to determine the time of day. When the sun hits the rectangle, the shadow will reflect at a different place depending on the hour. You can calculate the hour by measuring the degrees that the shadow falls from the rectangle. It is very similar to the sundial, but a little less advanced because it does not have numbers surrounding it like an average sundial. However, this is an advantage because it can be used anywhere in the world at any time so long as the sun is shining and you have a protractor!

The first people to use sundials were the Egyptians in 1500 BCE. The Egyptians used astronomy to develop the concept, and it was a monumental advancement in mankind. Their first primitive design looks a lot like my prototype, but a bit more advanced. This was a revolutionary invention, and greatly altered the way we live today. Sundials have been used by both ancient and modern cultures alike. This is a meaningful invention because as long as there is sunlight this is a 100% sustainable way of telling time.
My design is relatively simple aesthetically– it consists of a 6” tall rectangle made of a sturdy material on a stand so it can be upright.The units used to measure my time-telling device is inches, because I wanted to keep it as simple as possible.

I will employ math by finding the latitude of my exact area, (Chicago, IL) 41.8500° N, 87.6500° W. Once I do that, I can plug that number into a shadow calculator and determine what angle the shadow will fall at any given point in the day. Another way of doing this which is a lot easier and requires less materials is measuring the angle of the shadow with a protractor. By taking that measurement it is easy to determine what the time of day is.

A story about a pendulum

For my final Action Project in my math and science class (Light & Sound), we all learned about a time keeping device, I chose the pendulum.  This was an extremely interesting project, mostly because I got to research Galileo, who in my opinion is the best engineer ever.  Although this project was interesting, it was hard to figure out the math of the concept.  Building the prototype of a pendulum was equally difficult.  See my report below.

My device looks is a pendulum.  It consists of two metal poles to hole it up, and a rope with a metal bar on the end to go from side to side hitting the metal poles and making a sound.  Every one second it hits the bar, each time it hits the first bar, hits the second bar, and goes back to hitting the first bar it completes one cycle.  The math behind a pendulum is pretty simple once you figure it out:

In 1602, The Italian scientist Galileo Galilei studied the property of a pendulum. Galileo discovered the crucial property that makes pendulums useful as timekeepers, called isochronism; the period of the pendulum is approximately independent of the amplitude or width of the swing. The pendulum is an extremely key device in history for timekeeping. When Galileo invented it, it was instantly a famous and amazing idea. It goes on forever all by itself and requires very few materials. When technology wasn’t available back in the 1600’s, a sundial was the most precise timekeeping device. In my Light and Sound course we learned about frequencies and how sound travels. While doing this we created a radio. The goal of this of this activity was to create a radio that was efficient, credible and related to the country that we got assigned. The radio relates back to the course because by doing this, we can understand how radios played a part in other countries. Societies use radio for all means of communication. Radio was technically the first source of national communication.We also can now understand the frequencies from AM to FM.

To experience the true effects of AM to FM we had the chance to visit WBBM and WLUW.  Visiting this place helped us a gain a great deal in understanding radios. One of the more interesting parts of visiting radio stations is realizing that each and every employee must know the math and science of AM and FM. This has enhanced my knowledge but learning the time management and math skills needed to work in radio! There are many other sources around the world, but radios are still used for all means of communication.

Our experience assembling this radio kit was interesting. At first we thought we had a good idea of how to create this radio, but we soon realized that we had matched the resistors with the wrong terminals. We then found our mistakes and corrected the problem. This was a difficult project to create, and in the end it did not work due to faulty radio kits. Overall it was a great learning experience .

For our action project 2 we were appointed groups and constructed our own radios. We built radios to learn more about radio waves and certain frequencies from the radio such as AM and FM. I think the most challenging part of this project was the actual construction of the radio. Each circuit had to be in a very specific order and place within the radio. The thing I enjoyed most about constructing this radio was the F.E. that went along with the project. We visited WBBM and WBBW to learn more about radios and the business aspect of it. Over all I found this project to be extremely educational and one of the funnest so far! If you would like to check out my presentation it’s below!

Building an AM Radio

The second unit in our Light and Sound course focused on sound. We visited two radio stations, WBBM and WLUW, then built our own radios. I really enjoyed piecing together the wiring to make it work, and it was fun to listen to the stations we could get signals from once it was complete. Below is a presentation with more details of the project.

I made the radio!

For our Light and Sound (math) class we created and decorated radios.  After completing this project I was able to understand the basic principles of frequencies by putting the radio together. I learned about the uses of a radio, especially the uses for a radio in foreign countries.  The most difficult part of this project was connecting the extremely short wires together, while still trying to keep the radio looking nice… Check out my presentation below!

In our second action project we worked on radios. With this project we were able to understand the principles of frequencies by building the radio. We learned about how people use radios for a variety of things including entertainment, news, weather and sports among many others. They are used around the world for political, social, and economical reasons. I am proud of the design we made and the way we were able to portray the country theme while still keep the radio circuit essence visible. I learned a lot about the importance of a radio as a tool and necessity for people around the world. Below is my project. Enjoy!!!